Yesterday, our cities, state, and country recognized a fallen officer from the Adams County Sheriff’s department. It was reported across social media, televised on major networks, and appeared in many newspapers. Many of us watched and paid our respects, thoughts, and prayers to those closest to him…

On all accounts, he was a hero. He chose to act heroically each and every day, and ultimately he died because of that commitment. 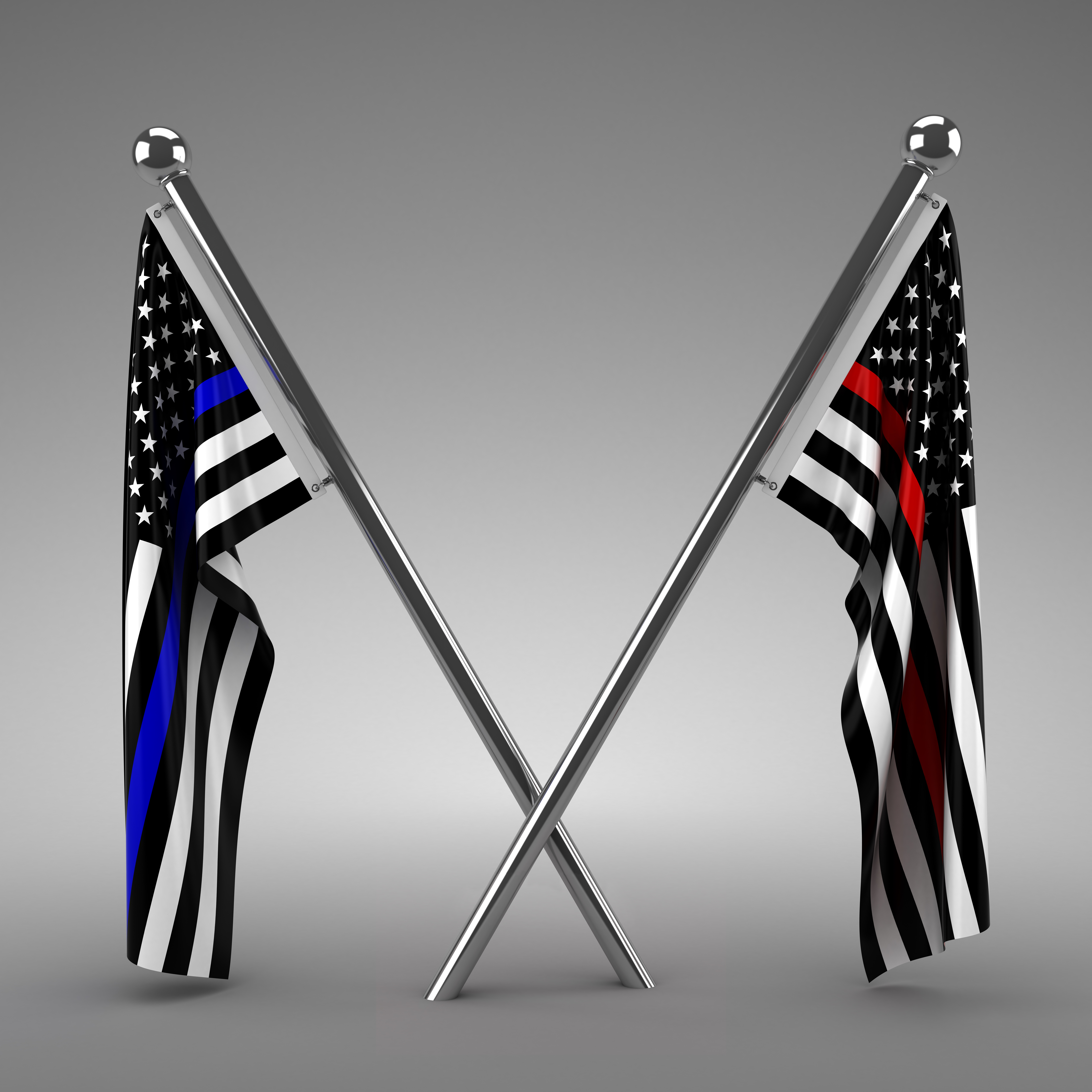 And yet… many of you may not know that in our state not very far away from Adams County, there is a devastated family, mourning the loss of a firefighter who took his own life last week.

Yesterday, as I watched our fallen officer be honored, a war raged inside of me.

I kept thinking to myself … how incredibly sad that this firefighter received no heroic recognition of how he risked his life for others. There was no acknowledgment for how he lived; instead, a quiet goodbye on how he died. I can only imagine the shame, guilt, pain, confusion, and anger that is confronting the family. I know nothing of the firefighter that chose to end his life last week… but make no mistake… he was a hero.

AND …though not mentioned in any newspaper or television station, a war Vet somewhere else took her own life and none of you know that hero’s name.

Those in our Armed Forces who’ve laid their lives down for the very ground and freedom we have live silently with shame and fight battles few can understand. Why do we allow for this?

This raises the question: what makes someone a hero? Is it how they die? Or is it how they choose to live their lives? Or perhaps, it is both?

As you read this, you might question why I consider a firefighter a hero despite the fact that he took his own life. You may even be wondering who I am.

Days that change everything-

On August 11th, 2004, this world lost two precious lives. I lost my husband and my twin daughter that day, but so often overlooked were all the heroes that were on the scene and behind the scenes to save my other two daughters.

My friends … last year, I had the distinct honor of meeting one of the firefighters that saved my surviving daughter Amber and McKayla’s lives. It was a meeting that took me by utter surprise, and one I still struggle to talk about without breaking down.

A Fort Collins teacher was telling his neighbor about my Dare You To Move program, and describing the story behind it. For some reason, the firefighter was interested in knowing where and when the accident occurred. After talking a bit, he realized that he was one of the firefighters responding to my family’s crash that day. The teacher quickly realized how this was all connected, and reached back out to me to see if I wanted to meet the warrior that saved McKayla and Ambers lives 13 years ago.

Quite honestly, I was nowhere near prepared for that meeting.

Anyone who knows me is well aware that I like to talk and openly share my feelings. Yet, on this day, I was speechless when the firefighter asked me: “Can I ask you, what was her name? What was the name of your daughter I couldn’t save? For thirteen years I’ve always wondered?”

Trying to maintain my composure I replied, her name is Brittany… Brittany Anne.

As I said, I still struggle to talk about this. I haven’t talked to the firefighter since that day and honestly, I’m not sure I could keep myself together enough to do it again.

I share my story today because it saddens me that many of our heroes and our First Responders see and have experiences that most of society will never comprehend. These images have the power to change you and so many continue to suffer silently with the memories and guilt that haunts them.

These heroes learn quickly to put their memories in a neat compartmentalized box as if it’s part of the job. And though their bodies may express all the warning signs that they need help, these men and women push on. Resilience yes, but without proper care, this response can be deadly. I know, I’ve been there myself, and not just once but multiple times.

And last week, though I don’t know the firefighter that took his life, we must recognize all of these unknown heroes who are so often laid to rest without most of us even knowing their names! This breaks my heart and only fuels my passion to continue to fight to save lives.

As the war raged inside me yesterday, I kept thinking what if this firefighter was the one who showed up on my family’s crash scene almost 13 years ago and those memories haunted him to the point that he felt he could no longer go on? Every person who ends their life has their reason, and I will always refrain from judging. I just wish I could infuse hope in them that with some help, it can get better. If you think I can’t relate to their struggle then you don’t know me or my entire story. I’ve worked very hard to be the woman I am after being diagnosed with PTSD in 2005.

I can only imagine the memories of the firefighters, police, dispatch, nurses all that saved my daughter’s lives must struggle with on a daily basis. Not to mention the lives they couldn’t save that day. .. my husband Brian and daughter Brittany.

As a society, we often shy away from talking about what scares us the most; the darkness that we all face and fight at times. No one wants to talk about suicide, depression or anxiety… it’s not glorious…but it’s necessary.

Even for me, it’s not easy but DAMM it… we are talking about lives here. Children growing up without parents and parents that must bury their children. Lives that if we weren’t so prideful and afraid to talk about suicide we might have saved.

If you work in a profession that saves lives, I share these two simple reminders with you today.

First, so often we get caught up in a position, title, or rank. But at the end of the day, I can tell you that when the men and women showed up on my family’s crash scene neither of my surviving daughters cared if the firefighters, EMT or officers were a Captain, Lieutenant, Deputy or Chief…. they only know them as lifesavers.

Second, in the pursuit of saving lives, don’t forget to save your own! 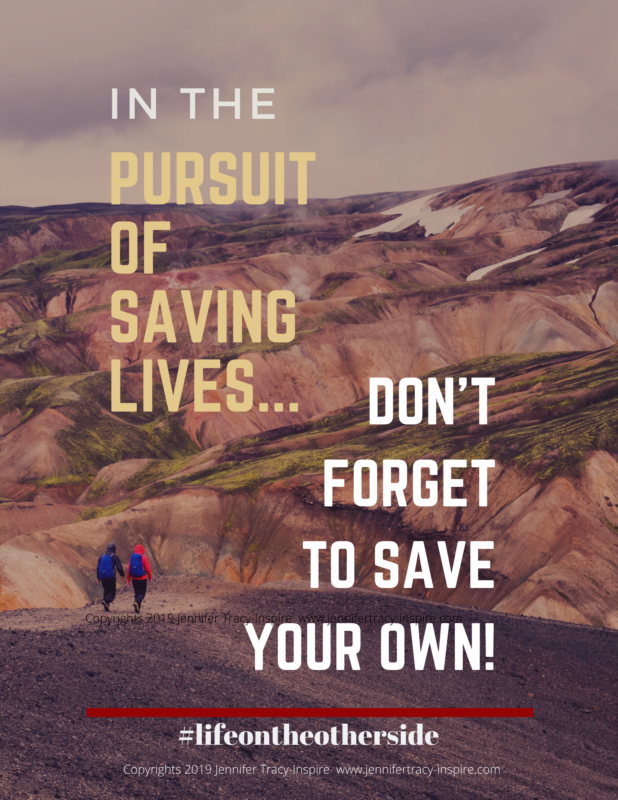 I’m incredibly thankful for all of my friends, family, and the professionals that didn’t judge me in the darkness. In so many ways you all saved my life when I couldn’t see the light. I don’t take such actions lightly; I am truly grateful that on my journey I found help.

To those of you still reading this, thank you!

Thank you for all the ways you have positively impacted our communities.

To all of the loved ones at home that lovingly support our First Responders, and those in Emergency Services, thank you!

With much love and respect, Jennifer

From The Deepest Darkness
To The Light of HOPE

Learn strategies and solutions to grow in the midst of adversity. When You Change The Relationship That You Have With Yourself, Everything Changes.

We created the “Master Guide To Mental Wellness” because these kinds of battles require a new way of thinking and a range of tools.